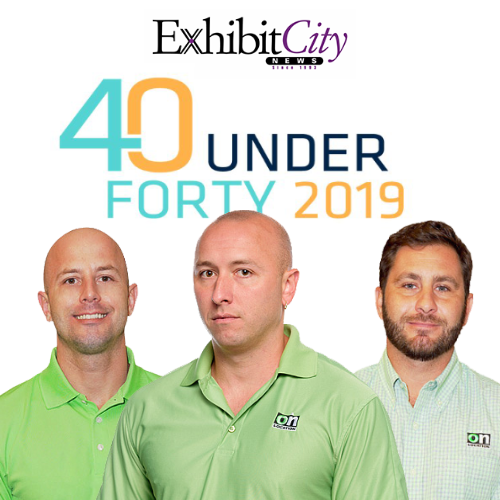 Mount Laurel, NJ – On Location, a nationwide provider of labor and management services for exhibits, events and environments, congratulates three (3) of its managers for being named to the Exhibit City News (ECN) 40 Under 40. East Coast Operations Manager, Stuart “Ty” Macaulay, Regional Manager-Nevada, Rob Morrison and Regional Manager-Florida, Nick Provini, were each recognized by the longstanding industry publication for displaying excellence in all aspects of their work.

Exhibit City News is known to be one of the leading media sources covering the meeting, convention and tradeshow industries. To complement its I&D ACE Awards, the 40 Under 40 recognizes young professionals for their dedication to company, customer, facility, union and co-workers. Each year, ECN selects eight honorees across five categories for going above and beyond with their hard work, loyalty and dedication.

“We are very proud to have not only one but three of our managers named to the ECN 40 Under 40,” said Michael Mulry, On Location General Manager. “While we see their efforts each day, it is an honor to have them recognized beyond the show floor. This illustrates their client commitment, skilled teamwork and overall dedication for providing the best possible Return on Experience.”

Ty Macaulay joined On Location in April 2016. He spent his first two years with the company managing all Florida-based projects after being an industry leadman on client-specific jobs for more than 13 years. His dedication and strong work ethic had him quickly expand his oversight. A Florida-native, he grew up in the business and would often be found on the trade show floor with his dad at a very young age. Ty was a leader on day one, pitching in and helping to plan shows outside of his area. As a result, he was promoted to East Coast Operations Manager in August 2018 and is currently responsible for cities from New York to Florida and as far west as Chicago.

Born and raised in the Orlando area, Nick Provini joined On Location in January 2017 as a Leadman and traveled nationwide managing crews. This was his first position in the trade show industry and over the first 15 months, Nick was more than a quick learner. It was clear he had the right attitude and commitment to the company’s client-centric culture. Nick continued to take on more responsibilities and grew into his new role by ensuring customer satisfaction throughout this region. In August 2018, Nick was promoted to Regional Manager-Florida and currently oversees anywhere from 5 to 40 staff members at rotating concurrent shows.

Rob Morrison joined On Location in April 2018 and dove right into his role as Regional Manager-Nevada. A seasoned trade show professional, Rob brought more than 14 years’ experience to the team. He grew up in the exhibit industry, working in Southern California on the trade show floor beside his father throughout high school before moving to Las Vegas. Over the years, Rob held various field and managerial positions with both I&D companies and full service exhibit houses. Today, he oversees all Las Vegas-based projects and lends support to teams throughout the west coast.

About On Location:
Founded in 1991, On Location has provided nationwide labor and management services for exhibits, events and environments that deliver a positive Return on Experience (ROE) for its customers – on time and on budget – throughout the country and around the world. As a leading exhibitor appointed contractor (EAC), the company recruits and trains highly experienced employees to become an extension of clients’ teams, developing a plan for their unique needs. The result is a true client centric approach and business model to provide nationwide continuity of hands-on service before, during and after each project. For more information, visit www.onlocationind.com.

About the Author: Dan Green